Swingruber who is a former Peace Corps volunteer in Paraguay. The students learned  the Peace Corps was founded in 1961 by then President John F. Kennedy, and that since 1961 more than 230,000 Americans have responded to the challenge of helping others. 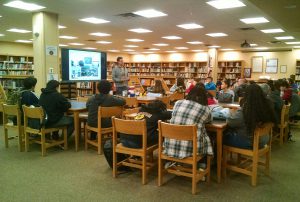 Mr. Swingruber served in Caazapá, Paraguay during 2017-18 school year where he worked side by side with local leaders promoting youth leadership and entrepreneurship.

During the presentation students learned about the local customs such as making traditional Paraguayan embroidered lace; drinking tereré, a bitter tea made from the same type of leaves that are used to brew yerba maté; and also that Paraguay is a bilingual nation because natives speak Guaraní first and Spanish second. It is one of the few countries in South America to have retained its native tongue as an official language.