The Greater Amsterdam School District > About Us > Budget & Taxpayer Information

GASD residents have approved a $75,918,919 district budget for the 2020-21 school year by a vote of 2,023-842. Three other propositions also passed. The vote, which is still unofficial until tonight’s Board of Education meeting, was held by absentee ballot due to the COVID-19 pandemic and the votes were counted over a nearly nine-hour period June 16-17.

Three candidates, Dr. Nellie Bush, Rev. Kent McHeard and Deana Mancini (all incumbents) were also re-elected to new three-year terms on the GASD Board of Education beginning on July 1, 2020. The final vote was as follows:

District voters also approved three other propositions that appeared on the June, 2020 ballot.

Proposition No. 2  sought voter approval allowing for the purchase of two school buses and security cameras at an estimated cost of $225,000, with 90 percent of the cost eligible for state aid reimbursement. The bus proposition passed by a vote of 1,964-887.

Proposition No. 3 asked voters to enable personal registration of voters for school district elections and votes to occur on any school business day from 8 a.m. to 3 p.m. at the District Clerk’s office and during any registration dates designed by the school board prior to the annual election and vote or any special vote, effective July 1, 2020. No person, however, would be permitted to register to vote in a school district election or vote less than five days preceding each election or vote. The personal registration proposition passed by a vote of 2,176-640.

Proposition No. 4 asked voters to approve the authorization of the GASD to levy taxes in the amount of $240,000 to support the Amsterdam Free Library for library services during the 2020-21 fiscal year and each year thereafter. The  library proposition passed by a vote of 1,773-1,063.

The Greater Amsterdam Board of Education adopted a $75.9 million proposed budget for the 2020-21 school year on May 19. The school board held a public hearing on the proposed budget on May 26. Access the link below to watch the budget hearing recorded on YouTube: 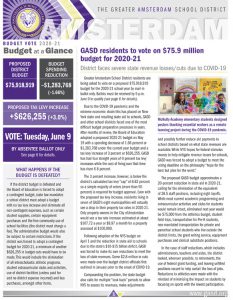 All school district residents will also receive a budget newsletter in the mail in early June. A downloadable version may be accessed below.

Click Here to view the newsletter in English and Spanish

Click Here for a sample voting ballot.This ballot cannot be used to vote with, only to view online.

2020 Board of Education Election

Five people have submitted petitions to run for three seats open July 1, 2020 on the Amsterdam Board of Education. Due to COVID-19 and Gov. Cuomo’s executive order, no petition signatures were required to run in 2020 and candidates could self-nominate themselves to appear on the election ballot. Each seat new  carries a three-year term. Like the budget, this year’s election will be held on June 9, 2020 by mail-in ballot only. Ballots are being mailed to qualified voters homes and must be returned no later than 5 p.m. on June 9th. If you are a qualified voter and don’t receive an election ballot in June, please contact District Clerk at districtclerk@gasd.org. 2020 candidates are incumbent board members Dr. Nellie Bush, Rev. Kent McHeard, Deana Mancini, and newcomers Thomas J. Coughlin, Jr. and James P. Walrath. The three candidates receiving the highest vote totals will be elected to the Board of Education.

School district finances are subject to internal and external auditing, which promote both accountability and transparency. The Greater Amsterdam School District Audit Committee, which is comprised of Board members and community members, is charged with providing independent advice and recommendations to the board.

Each year, in accordance with New York State regulations, an independent auditor conducts a review of the districts’ financial statements. After the audit is completed, it is reviewed by the Audit Committee and accepted by the Board. This typically takes place in the fall. View the most recent audited financial statements.

If you are unable to access any of the documents shared on this page, please contact District Clerk Lorrie Schell at lschell@gasd.org to receive the information in an alternate format.