The Greater Amsterdam School District mourns the loss of their great alumni Kirk Douglas, who died today at the age of 103. 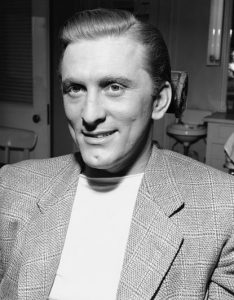 In 1935 he graduated from high school, eager to attend college, for which he first had to earn the tuition money. From 1935 to 1939 he attended St. Lawrence University, Canton, New York, where he won recognition as president of the student body, the Mummers dramatic society, and the National Student Federation of America; he was, in addition, an intercollegiate wrestling champion. Later he would recall those years in a story for publication, “A Call to ‘Gamblers’.

As an actor and philanthropist, Douglas received three Academy Award nominations, an Oscar for Lifetime Achievement, and the Presidential Medal of Freedom. As an author, he wrote 10 novels and memoirs. He is No. 17 on the American Film Institute‘s list of the greatest male screen legends of classic Hollywood cinema, the highest-ranked living person on the list until his death.

Douglas, born Danielovitch, was raised in Amsterdam along with six sisters. He starred in over 90 films, and was perhaps best known for his lead role in “Spartacus.” In 1985 the city held a welcome home parade for their famous son and movie legend.