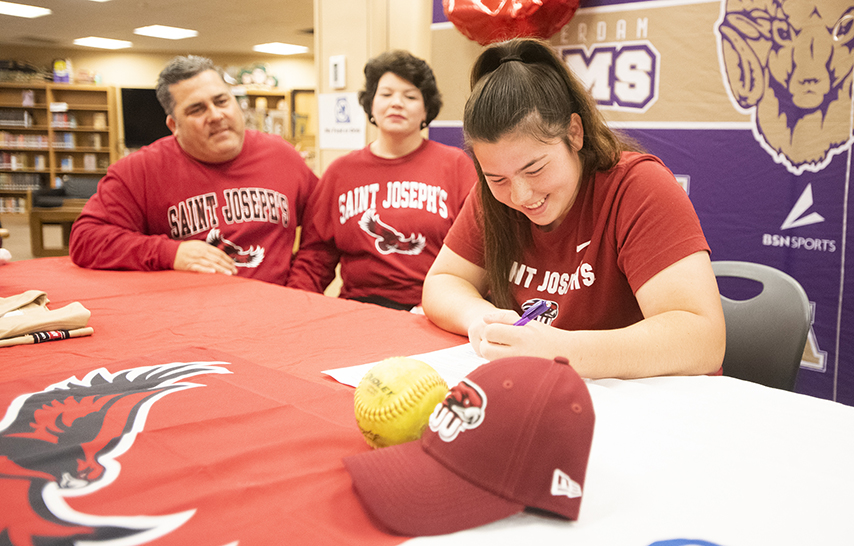 Whether it’s Amsterdam senior softball star Shelby LaMont’s patience at the plate, her quick release from behind the dish to throw out runners at second base or during a powerful performance over the summer that allowed her to make her college commitment.

On Tuesday afternoon, LaMont celebrated her decision to become Amsterdam High School’s first Division I softball commit when she signed to attend St. Joseph’s University in Philadelphia during a ceremony in the AHS library.

The Rams catcher made her decision to attend the Atlantic 10 softball program over the summer, but was restricted from signing her National Letter of Intent until the NCAA’s early signing period opened.

The library was filled with relatives, coaches, fans, and a crowd of fellow Rams students to share her college signing ceremony.

She was introduced by her high school coach Brenden Cetnar, followed by comments from her hitting coach Brian Dipiazza of Out of the Park Softball before turning the ceremony over to LaMont.

She thanked her coaches, her extended family along with her parents and sister, Megan, in several heartfelt pages of notes.

“I always wanted to go to school in the city and St. Joe’s is really nice,” LaMont said. “As soon as I stepped on the campus, I felt very welcomed and at home. The coaches were great, I saw a couple of teammates walking around the school. They introduced me to them, they were sweet as can be and I couldn’t ask for anything better.”

Due to the novel coronavirus pandemic affecting LaMont’s summer showcase window, her recruiting season was limited. But, she made the most of it during a swing through Colorado and Oklahoma with the Empire State Huskies travel club.

“I was in Colorado, and I hit amazingly, best weekend ever,” LaMont said. “I hit six or seven home runs and right there they told my coach that they’re interested in me.”

Shelby’s sister, Megan, went through the recruiting process before committing to SUNY Cortland, where she is a junior captain for the Red Dragons.

“She wasn’t one of those athletes, [who would say] ‘DI, or I don’t care anymore,’ and quit the sport,” her father Rick LaMont said. “She knew if she worked hard, she could kick as many doors open as she could. Whatever D [division] it was, I think she would find a fit.”

Shelby LaMont’s parents supported her from offers near and very, very far.

“She was very blessed to have a lot of interest from other schools,” her mother, Kim LaMont said. “She fell in love with them immediately, we’ve gone to the school three times already.”

Philadelphia is twice as far as the two and a-half hour trip to Cortland, something the couple will adjust to.

“They said they were looking for someone with a lot of athleticism,” Shelby LaMont said. “They could see that I was very athletic, and I can play anywhere on the field. Put a jersey on my back and I’ll be happy as long as I’m on the field.”

The idea of a perfect match is often brought up during an athlete’s college recruiting process. Rick LaMont said he knew exactly what would be best for his daughter.