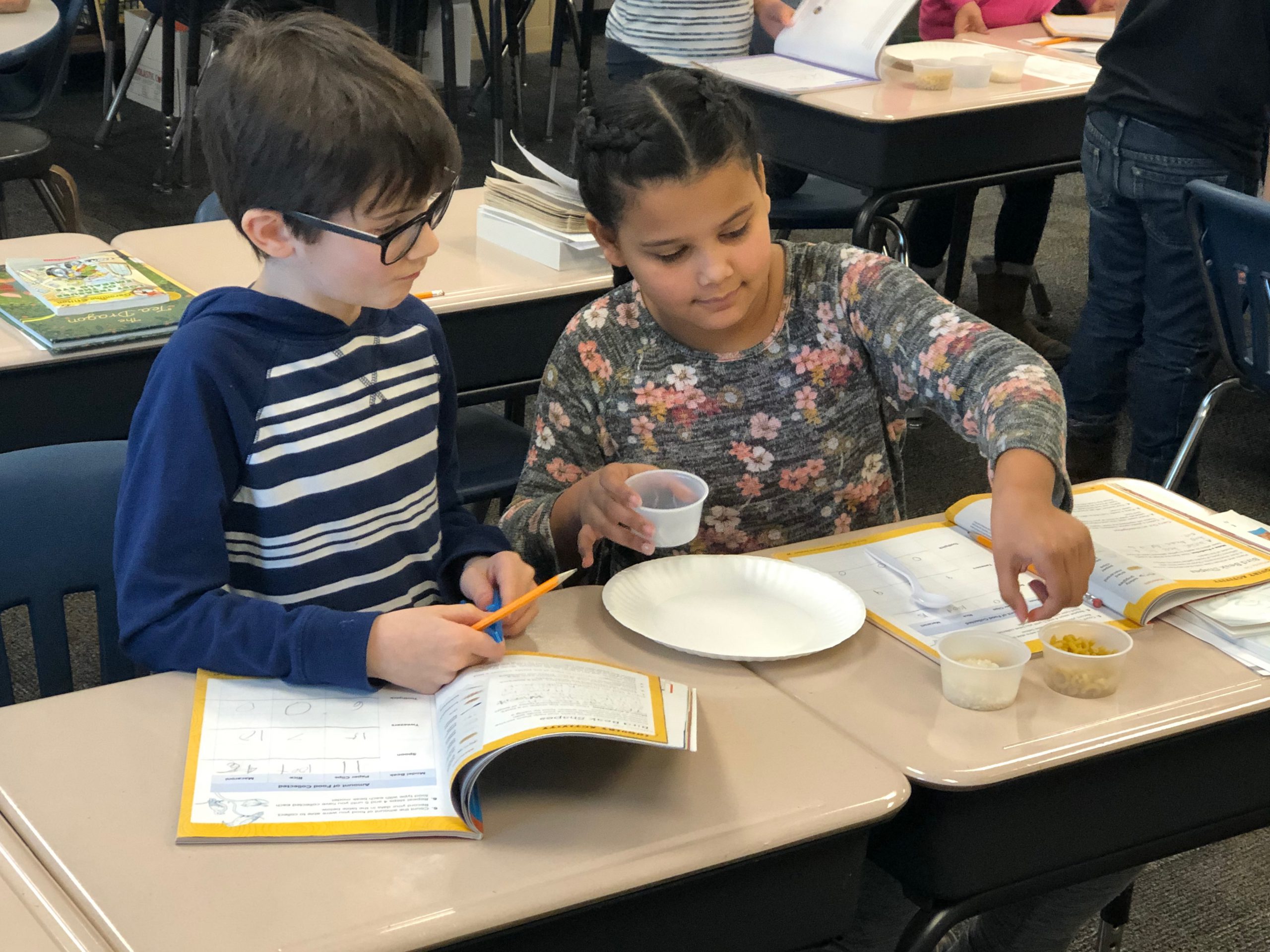 The phrase “eats like a bird” is taking on new meaning these days for third graders at Amsterdam’s Marie Curie Institute.

As all elementary schools begin to migrate to the Next Generation Science Standards (NGSS) in New York State, Curie students are getting a bird’s-eye view of what that will look like for their learning going forward thanks to a little help from their fine feathered friends.

Those learners have flocked to the classrooms of third grade teachers Jennifer Satas and Emily Carayiannis, who are challenging their students to uncage their minds to answer the question: “Which bird beak works best for eating in the wild?” But before they could go tweeting out their answers, that would require a little hands-on investigation, which is exactly what the Next Generation Science Standards are all about.

A major difference between NGSS and previous science standards used in schools is the concept of three-dimensional (3D) learning. Through 3D learning, science is no longer taught as a series of isolated facts. For instance, instead of asking students to read a textbook and answer questions at the end of each chapter, students are conducting their own investigations, solving problems, and engaging in discussions and analysis with their peers with teacher guidance. They are also being required to find evidence to back their theories and claims.

That takes us back to the nest at Curie Institute and the great bird experiment. Earlier in the unit, the students first did some reading and research and discovered there are some 18,000 species of birds in the world. Different bird species have differently shaped beaks, they learned, because each species has evolved a beak design that suits its diet and lifestyle. Beaks function somewhat as human tools do, like a fork or spoon, helping the birds to access food.

But which human tools, like bird beaks, would function the best? The young scientists were about to find out.

Working in teams, and under a 20-second time limit, the students conducted numerous trials using human tools to move objectives from a paper plate to a plastic cup. Each time, they counted the number of objects they had moved with each tool and recorded their data on a worksheet.

During one test, the students used a spoon (which would resemble perhaps a rounded duck bill) to move everything from paper clips, to raw elbow macaroni to rice kernels from plate to bowl.

“Now count your macaroni,” teacher Satas told her students, after yelling stop as her 20 second counter expired on her Smartphone. “Oh, 75? That’s a big number!” she said.

“No problem with that experiment,” agreed one student, who described the exercise as no more difficult than scooping his breakfast cereal into his mouth.

But breakfast would not be so filling today for the long or pointy beaked birds, the children soon discovered, as they changed tools from a spoon to a set of tweezers and then a toothpick to move the same macaroni and the rice from plate to cup. In both cases, that maneuver proved much more difficult and time consuming.

After two days of trial and error it was time to answer the question, with every student agreeing the spoon or rounded beak was the most successful tool used in their testing. But simply agreeing was not enough to meet the new science standards.

“But what is your evidence for that?” asked Satas, pointing to the worksheets. “You can’t just say it, you have to prove it to me. Only the numbers will tell the story.”

Like the great Curie bird experiment, teachers in the district will continue to develop lessons and strategies to engage students and create opportunities for them to demonstrate new thinking and learning strategies as the Next Generation Science Standards are fully rolled out at the K-12 level.

This year’s third graders are the first class to delved into the Next Generation Science Standards which were introduced in September for grades P-3 and grade 6. This June will mark the last administration of the grade 4 science test aligned to the 1996 New York State science standards. Today’s third graders, like those featured in this story, will take the first next generation science assessment in grade 5 in June 2022.

Similarly, the NGSS will be introduced in grades 4 and 7 next September, and in grades 5 and 8 in September 2021. Like the grade 5 test, a new grade 8 intermediate science assessment will also debut in June 2022, followed by new high school science Regents exams in 2023 and 2024.

WHAT ARE THE NEW SCIENCE STANDARDS?

The Next Generation Science Standards (NGSS) are a new set of K–12 science standards that were developed by states, for states. The NGSS identify scientific and engineering practices, crosscutting concepts, and core ideas in science that all K–12 students should master in order to prepare for success in college and 21st-century careers.

WHY ARE THEY IMPORTANT?

It has been more than 17 years since the National Research Council and the American Association for the Advancement of Science produced their reports from which most state science standards are based. Since then, there have been major advances in science and our understanding of how students learn science. Students need the kind of preparation that gives them the tools and skills necessary to succeed in a rapidly and continuously changing world.

When current students graduate from high school, more jobs will require skills in science, technology, engineering, and mathematics (STEM) than in the past. The NGSS provide a strong science education that equips students with the ability to think critically, analyze information, and solve complex problems — the skills needed to pursue opportunities within and beyond STEM fields.

HOW WERE THEY DEVELOPED?

The NGSS were developed through a collaborative state-led process. Science supervisors from 26 states worked with a 40-member writing team—which included teachers, working scientists, and education researchers—to develop the draft standards, based on the National Research Council’s document A Framework for K–12 Science Education. Each of the 26 states established a broad- based committee to review draft standards and provide feedback. In addition to those reviews, a larger stakeholder team composed of hundreds of members representing K–12 educators, administrators, higher-education faculty, scientists, engineers, business leaders, policymakers, and key organizations provided feedback during five review periods. The draft standards went through two public review periods and received comments from more than 10,000 individuals.

HOW WILL THE NGSS SUPPORT COLLEGE AND CAREER READINESS FOR ALL STUDENTS AND PREPARE THEM TO SUCCEED IN THE GLOBAL ECONOMY?

A high-quality, robust science education means students will develop an in-depth understanding of content and will gain knowledge and develop skills—communication, collaboration, inquiry, problem solving, and flexibility — that will serve them throughout their educational and professional lives.

WHAT WILL THE NGSS LOOK LIKE IN THE CLASSROOM?

High-quality education standards allow educators to teach effectively, moving their practice toward how students learn best—in a hands-on, collaborative, and integrated environment rooted in inquiry and discovery. Teaching based on the NGSS calls for more student-centered learning that enables students to think on their own, problem solve, communicate, and collaborate—in addition to learning important scientific concepts.