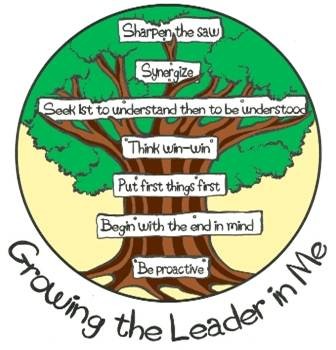 That’s the philosophy behind the Leader in Me program, a popular educational initiative that’s creating a winning culture these days at Tecler Elementary School.

Leader in Me is part of the school district’s social-emotional learning model and based on the core principles from Steven Covey’s award-winning book “The 7 Habits of Highly Effective People.” But instead of developing success for grown-ups in the business world, this spinoff program for children subscribes to the theory that leadership skills can be attained much earlier in life – even at the elementary school level.

Like the original book, 7 habits guide the Leader in Me program as Tecler students are engaged in various school lessons and activities throughout their K-5 years. By mastering those 7 habits students realize that everyone can be a leader once they understand how to lead their own lives. From there, they can take it one step further by encouraging greatness in others—whether they be family, friends or neighbors.

“We want our young people to learn, grow and become the type of students who make good decisions in life,” said Tecler Assistant Principal Tina O’Brien, who spoke about the program at the GASD  Board of Education meet March 17. “That means being able to take care of themselves first, then continuing to fill that leadership role both academically and emotionally with their friends and peers.”

Children are introduced to the habits by visualizing a large growing tree. Habit 1: “Be proactive” is based at the tree roots. As they climb the trunk of the tree and get higher and higher they are challenged to master Habits 2-7 until they reach the top. The other habits ascending upward are:

“As they climb we want them to find that initiative, and build self-motivation and self-confidence,” O’Brien said. “Along the way they learn planning and goal setting skills, organization, time management, problem solving, creativity and teamwork.”

“At Habit 7 is when they really start to see as fifth graders they’ve made the climb (as leaders) physically, spiritually and mentally,” she said.

Tecler recognizes a group of students and a teacher monthly with awards for deeds they have done that put their new leadership skills into action. Some students have even been asked to lead the morning announcements.

The school has reached a high point in the Leader in Me process where is its applying for Lighthouse status in the program, which would mean more accolades and a banner to hang at the school.

“Our students have reach mature and sustaining levels at each habit and our school is speaking a common language now,” O’Brien said.