For over ten years, Amsterdam High School has had a Mock Trial Team that competes with other schools in Montgomery County. The New York Bar Association publishes a fictional case, civil or criminal, and students spend months preparing to try both sides of the case.

The Mock Trial team has 12 significant players on the team – six lawyers and six witnesses. In March, they competed against other schools in Montgomery County. They try the case at the Fonda Courthouse in front of a Montgomery County judge. On Tuesday, March 12, they defeated Ft.Plain High School to move on to the regional competition on April 13, 2019. The competition will take place at the Albany County Courthouse. 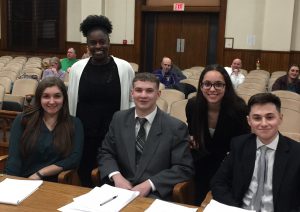